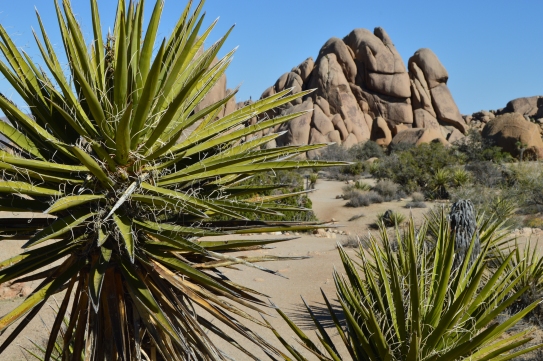 A view from the top of Joshua Tree National Park 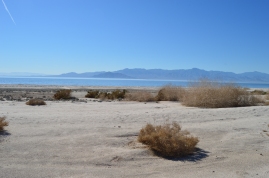 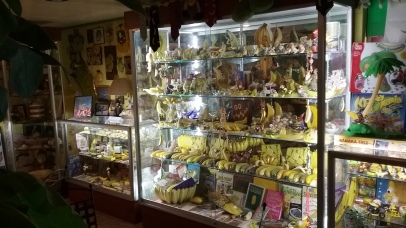 Back to the desert again. But this desert has some really interesting trees.  Joshua Tree National Park is where two different styles of desert meet, the Mojave and the Colorado.  After splurging on our beachfront spot on the coast we needed to find a free boondocking spot for our Joshua Tree Adventure.  We took to Campendium.com and were not disappointed.  We camped for free at Joshua Tree South on BLM land located right outside the southern entrance to the park.  There were lots of campsite with fire rings and the spots were fairly spaced out.  It was only a mile off the interstate but you couldn’t hear the traffic.  A really neat thing about the spot was that you could see the headlights of the interstate traffic all night but it was far away and kind of mesmerizing watching the lights in the darkness of the desert.  Some camping nights are more memorable then others and we had a really great one here. There was one evening we were hanging out watching the stars and gazing at the interstate traffic in the distance. We couldn’t see our neighbors because it was so dark out but the people to the left of us were playing exactly our favorite kinds of music at their campsite and on the right of us was a group of Chinese college age kids playing games and laughing in the dark.  It was a really good vibe all around. Lots of different people hanging in the desert in the middle of nowhere enjoying their evening.  Just a moment of pure happiness, which is what it’s all about.

We spent two days exploring Joshua Tree National Park. This desert landscape was very different than Death Valley.  There were tons of huge geological rock formations to climb on and a lot of really cool hiking trails.  We hiked at Skull Rock, a trail named for the giant rock that resembles a skull at the beginning of the trail.  We also hiked up to the top of Ryan Mountain for stunning 360 degree views of the park.  A challenging hike but totally worth it for the views!  My favorite thing we saw were the Cholla Cacti they were short, stout, bush like cacti with shades of yellow and green needles.  They looked almost fluffy but Ryan can tell you, don’t be fooled, they are very pointy!  We also saw lots of Joshua Trees of course.  They are really neat trees and grow pretty large.  I was surprised how much vegetation and wildlife were in the park.  When we were leaving the park one evening Ryan had to swerve around something in the road, it looked like a hand scurrying across the road.  It was a giant tarantula!  Supposedly they are the gentle giants of the spider world but I was happy to view it from inside the truck.

From our boondocking spot we also checked out a couple other nearby places. We stopped in at the International Banana Museum and checked out their insane collection of everything banana related.  And I mean EVERYTHING banana.  There were posters, figurines, candy, liquor, stuffed animals, ash trays, and basically anything in the world that is flavored banana or has a banana on it.  They also served banana flavored treats so we sat at a banana themed table and had a banana split and a peanut butter, chocolate, banana shake.  An interesting road side stop in the desert.  After the banana museum we checked out the Salton Sea.  The Salton Sea is located directly on the San Andreas Fault Line,  and has a higher salinity than the Pacific Ocean but less than The Great Salt Lake according to Wikipedia.  The salinity here is increasing and fish are dying at rapid rates not being able to survive in the changing environment.  From a distance the lake looked beautiful, but after parking and walking towards the lake the smell of dead fish was overwhelming.  It didn’t take long to see the smell was coming from piles of dead and decaying fish lying along the banks.  It’s an interesting reminder of how our landscapes and ecosystems can change quickly.  I recommend looking it up, there’s a lot more interesting information about this lake in the middle of a desert than I have room for here.

Joshua Tree was our last California spot, it was time to head further east. Our next location had been on my list for a while.  It was time to say good bye to the desert and hello to the red rocks of Arizona