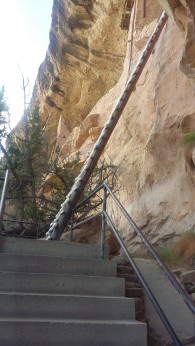 One of the wooden ladders we had to climb to enter Balcony House. It was a straignt drop off behind us.

Balcony House, built into the side of the cliff with small windows in the rooms.

We had to crawl through this tiny door way on our tour.

Another look at Balcony house. 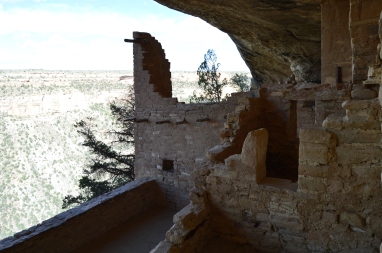 A view showing how these communites were built right on the edge of a cliff, way up high.

This is called a Kiva and it was used for spiritual ceremonies. 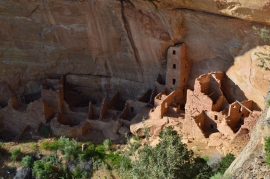 A look at a clif dewelling from a distance, Mesa Verde National Park

A cliff dwelling from a distance, Mesa Verde National Park 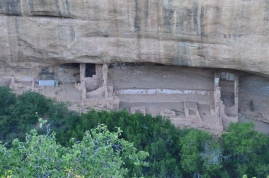 An above ground archeological site of a dwelling, Mesa Verde National Park 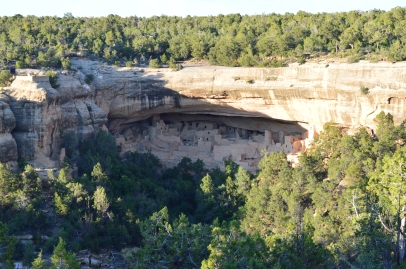 We were sad to leave Utah but ready to beat the heat and head back towards the cooler temperatures of the mountains. Continuing our Colorado/Utah Loop Tour we left Moab and drove to southwest Colorado to check out Mesa Verde National Park.  During the short 2 hour drive the scenery of red rocks began to get greener and the mountains in the distance got bigger.  Since the drive was short we planned on checking out the park and then settling into a free boondocking spot I found on Campendium.  At the last minute I decided to see if they had any camping available in the park for the night.  Sometimes it’s really difficult to find camping in the National Parks if you don’t have a reservation.

I pulled up the website and we were in luck! There was camping available but it was going to cost $32 to tent camp for one night. Wowza that’s expensive! We rarely paid that much in our camper and if we did the site usually had water and electric too. Then I read about their really nice bathrooms and shower house and decided after a week of not really having a decent shower $32 sounded pretty reasonable.  We paid our $32 and listened to a lecture on making sure we followed camping procedures for bear country. The lady obviously didn’t know she was talking to the biggest follower of bear country rules ever.  I follow every guideline and am never without bear spray in bear country.  I have an insane obsession with reading about bear attacks and an absolute terror of being eaten by one.  I blame my good buddy Kaci for introducing the book When Humans become Prey into my life.  I also believe strongly that we as humans are responsible for allowing wild animals to stay wild.  The best way to do that is by ensuring animals don’t get comfortable around humans and human food.  The park rangers always say a fed bear is a dead bear.  I will do my part to keep the bears away so they can have long happy lives.

A cool thing about Mesa Verde National Park is their visitor center is located before you enter the park. Visitors can actually go inside and look around at the art and exhibits before paying to enter.  If you are in the area with a little time to kill but not enough to see the park, stop in and take a look around.  They have wonderful exhibits there! I’ve talked before about how the National Parks don’t just protect land and wildlife but they preserve history as well. Mesa Verde is all about the history.  The park preserves over 5,000 archeological sites, 600 of which are cliff dwellings of the Ancestral Pueblo People that lived in the area from 600 AD to 1300 AD.  The visitor center is full of artifacts and beautiful pottery that has been recovered from the sites.  Visitors can purchase tickets to tour some of the cliff dwellings with a ranger.  The tours only cost $5 per person and are totally worth it!  The cliff dwellings are literally located on the sides of cliffs and require climbing huge ladders and crawling through some small spaces.  It’s not for people afraid of heights and I’m definitely not a fan, but there was no way I was passing up the opportunity to be Indiana Jones for the day! Visitors can tour Cliff Palace, Balcony House, and Long House.  We purchased tickets for the last tour of the day of Balcony House.

We set up our camp and then started driving towards Balcony House, it’s about an hour drive from the campground inside the park. We stopped at several viewpoints along the way and were able to look across the canyon and see dwellings on the cliffs opposite us.  These structures are insane!  They are located in openings in the cliffs hundreds of feet down from the edge above.   A whole community of people lived in these cliff side structures and had to scale the walls to reach the land above.  It’s amazing to look at and think of how they had to go about getting food and supplies down into areas to live.  It’s also crazy to me how many people would live in these tight knit areas.  What if you were born into one of these families but were afraid of heights? I would never have survived climbing in and out of these places on a daily basis.  There are also many above ground archeological sites that we were able to hike to and around that were very interesting.  The cliff dwellings were really the star of the show for me though.

The last tour group of the day was small and our Ranger was able to really talk at length and show us some cool parts of the Balcony house you may not see on larger tours. My main advice if you visit is don’t look down and really don’t look behind you while on the ladders!  The pictures are the best way to describe this place so I hope you enjoy them!

After our day of being Indiana Jones we headed back to camp for a simple dinner of chips and sandwiches and then headed to the shower house. It was amazing!!! My favorite kind where you have your own room you can lock yourself in and plenty of space to put your stuff and dry off after.  The best part was the diagram showing that it was for showering only, not pooping. I absolutely love all the crazy signs we come across in our travels!

Mesa Verde is a special place and their facilities are top notch. Besides camping they also have a lodge, restaurant, and a huge gift shop that offers a café and groceries for sell.  They even have laundry services available.  We didn’t need them this time, but when we are on the road full time it is really nice to do laundry where you camp. The views here are awesome too.  If you’re planning on being in the Southwest Colorado area or even Moab, put it on your list and go be like Indiana Jones for a day, you won’t be disappointed!